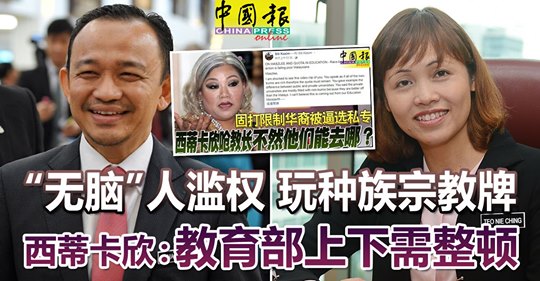 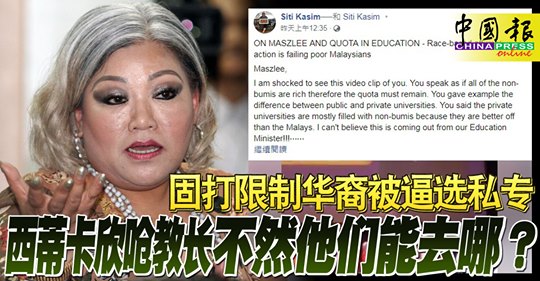 Malaysian education and quota: The Endgame

IN my last article, I took us along memory lane through the 60s and 70s when our education was world class. As I said, we prepared our bumiputra students at foundational levels in secondary residential and semi-residential schools to be able to competently compete on merit with others, at primarily international universities overseas.

After the social engineering of the New Economic Policy (NEP) quotas of the late 80s, our education system today is wrought by an overabundance of religious indoctrination, overtly in the curriculum and covertly in our public schools’ teaching environment. This was accompanied by the forcing of unqualified bumiputra students into local public universities that had to be graduated into the workforce in spite of them being mostly non performing. Gradings and exams had to bent to ensure large drop out numbers do not inundate the population. Instead, we flood the workforce with mediocre graduates who today fill the ranks of the civil service and government-link-entities top to bottom.

These graduates, in fact, today also fill up the whole levels of our education administration, teaching workforce and universities. Not all, but to most of them out there – you know who you are. Case in point are all the so-called bumi-based NGOs heads, university administrators including vice-chancellors who are somehow twisting their arguments into pretzels to defend the hapless Education Minister who just put his black shoes into his mouth with respect to the issue of a 90% quota for bumis in matriculation.

By now, everyone and their grandmother have seen the video-clip of our supposedly esteemed minister justifying the existence of matriculation quota in favour of bumis because the non-bumis are rich. To add insult to the wounds, he proudly claimed that private universities are mostly filled with non-bumis because non-bumis are better off than the Malays.

Let me today reiterate that this assumption can no longer be left unchallenged. It is patently untrue that all or even the majority of non-bumis are rich and are therefore of no need of government assistance. That the Malays are indeed so poor, that they are the only ones who are overwhelmingly in need of help.

This is a slap on the face of poor non-Malays and an insult to the many hard-working Malay parents who do not rely on government handouts and in general compete on their own merit.

Let us look at the reality, shall we?

Figures provided by Parliament in 2015, showed that bumiputra households make up the majority of the country’s top 20% income earners (T20), but the community also sees the widest intra-group income disparity. According to data from a parliamentary written reply, the bumiputra make up 53.81% of the T20 category, followed by Chinese at 37.05%, Indians at 8.80% and others at 0.34%.

So which groups overall are the top 20% income earners in the country? Answer: bumiputras by a whopping 16.76% to the next group, the Chinese!

This means that in spite of almost 40 years of affirmative action, handouts, subsidies and quotas, bumis as a group has a large disparity between its haves and the havenots. That raises the question if it means practically none of the government assistance has in fact gone to help the bumis that truly needed help but has gone to further enrich those who are already having it all!

To the Malays, I say, “You should look into this disparity instead of pointing fingers to other Malaysians who work hard to uplift themselves without any help from their own government”.

Maybe because of your adulation of your Bossku, feudal fealty or religious chieftains that they are the ones that are taking up what is essentially yours to uplift your own lives?

After all the YAPEIM (Yayasan Pembangunan Ekonomi Islam), yes, another institution in Malaysia using religion to sucker people, the Director himself takes home RM400,000.00 in bonus and his senior executive draws another RM250,000.00 all by themselves. Must be one hell of a “pembangunan ekonomi Islam”.

The problem is not between the Malays and the other races. The problem is clearly within the Malay community itself. The help is not reaching the supposed target group. Why? So do not punish others with quotas that penalise the excellence of others for your own dysfunctions.

Now, contrast with the Chinese and Indian communities, where the M40 group makes up the majority.

It is so clearly not true that all non-bumis are rich and therefore the quotas must remain to enable the bumis to compete on an equal footing. The quotas are no longer justifiable if it was ever justifiable in the first place. It is very clear from these data that equal opportunity to university places must be provided irrespective of race purely on merit. The help on the other hand must be in the form of scholarships or loans to those deserving based on the financial capability of each successful university entrant, as simple as that.

If a candidate does not qualify, he or she does not, race be damned. That person must then take a different route – vocational or skilledbased profession or any other road to success. There is nothing wrong with not being a university graduate if one is not qualified. Find your vocation and passion in a field that you will excel in.

The Government has no business populating a university and later the workplace with a single race based on the criteria of fulfilling quota. It makes no sense and it is the root of ensuring the downfall of both the administrative branch of government or even the overall machinery of the nation’s economy.

Maszlee claims that foreign university branches in Malaysia are filled up by non-bumis, therefore Malays need more places in public universities via matriculation. As such the Government instituted matriculation in 1999. He cited Monash and Nottingham as examples. Unfortunately, Monash was opened in KL in 1998 and Nottingham in 2000. That lie blew up in his face pretty fast, didn’t it?

But really why would private universities be filled up with mostly non-bumis? Can’t Maszlee see that if the local public universities are providing only 10% quota to non-bumis to enter via matriculation, an even tougher entry through STPM and none via UEC, that middle and low income non-bumis will have no other choice but to opt for the less expensive private local and branch universities to sending their children for overseas education?

They even can’t gain entry to public universities due to the quotas despite having better results than Bumis. Where do you expect them to go then Maszlee? I know of many non-bumis who are scraping their barrels to ensure they send their kids to further their studies either local or overseas. Many of them have fewer children because they know they will have to pay for

their kid’s education in the future. With most if not all of the scholarships given to bumis do they have another cheaper option?

How much more heartless is your assessment of our fellow non-bumis’ predicaments can you get, my dear Maszlee?

I think Maszlee need to learn facts and have some critical thinking before opening his mouth. Being the education minister is not like teaching religion, where people are not going to fact-check you because they think you are a gift from God. An education minister with such thinking cannot be allowed to stay in that position much longer. It is untenable.

Interestingly of late, a number of those from the Malay academia have come to the defense of the hapless minister defending matriculation quota because of workplace imbalance in the private sector. I have to ask is this proof that our universities are headed by Malays who have no business graduating and being employed and now heading such academic institutions and organisations? Do they even realize the tenuous relations between entry quota into learning institutions vs recruitment variables?

We truly need to clean up the education ministry from top to bottom including at our public universities. Too many people with no brains sucking up to powers that be and playing the race and religion card. It’s enough to make you weep.

Back to our conundrum that is the Malaysian education, what then is our endgame?

1. Stop quota - period. Any type of quota. It does not work and it will destroy the capability of our public and private sector to excel. Merit must reign.

2. Go back to basics. Primary and secondary education are the foundation that will allow any persons of any race to compete on equal footing in order to enter vocational institutions, colleges, and universities. The rest will take care of itself upon them graduating and joining the workforce. Trust in our youth. The bumis are not incapable of excelling given the right foundation.

3. Bring back a Science, Mathematics and English-heavy curriculum for primary and secondary years. Go back to basics. These are foundation years. Do not worry about having the latest technology. Children will absorb that in their own time. Tertiary education is where skill-based knowledge is acquired. Foundational knowledge and critical thinking is honed before you leave high school.

4. Please leave religion at home. Teach it if you want but do it outside of normal school hours. Let our children be among their peers as human beings without any differentiation of beliefs and faiths. Let them celebrate their differences without adults telling them who is better than others. Show them all the beauty they possess without judgment.

5. We are all Malaysians. We all bleed the same blood and we all weep the same tears when we are capable but are unable to fulfill our potential because we do not have the financial means to achieve those goals. Help us irrespective of race. All of us contribute to our taxes. No one group should benefit more than the other because they are of a different ethnicity.

We will see that Malaysia will prosper with each race helping each other as Malaysians once and for all.